News hit late Sunday evening that the comic book artist I have long considered my favorite had passed away at age 93. I had seen earlier in the day, or perhaps Saturday, that he was in the hospital, and sent up a prayer for him.  By today, Monday, Nick Cardy's passing was widely reported, including by DC Comics [link] where he worked on some of my favorite series in the late 1960s-early 1970s, Aquaman and Teen Titans, and for several years in the early 1970s was the cover artist for virtually every DC title.  His delectable "Cardy Women" are legend [link].  He is the comic book artist I will most regret never meeting at a convention and getting a personalized sketch from.  My condolences go out to his family, many friends, and innumerable fans.

Here, for April Fool's Day, is a story that I remember fondly from my childhood. Frankly, it's too chock-full of zany Silver-Age wackiness for any kind of abstract and selected panels to do it justice, so in a departure from my usual practice I present it in whole – followed by a text feature from two issues later (#390, July 1970) that details all (?) of the “mistakes” in it.  But are they really mistakes...?


I hope you enjoy it!  As you read through it, get a load of Superman's repeated expressions of slack-jawed astonishment! - and take note of the little guy that keeps appearing in various windows.... 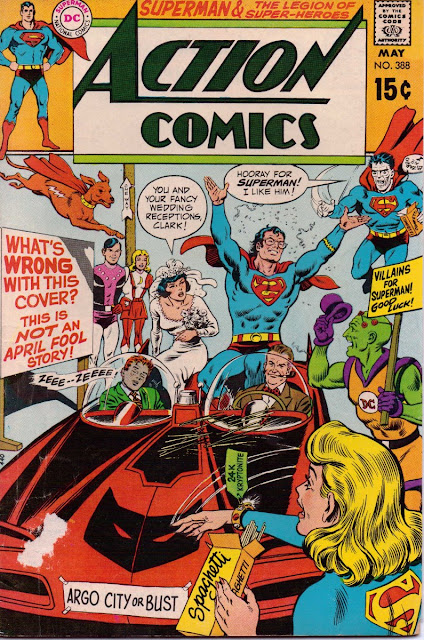 I picked this book up – actually in its 2012 Barnes & Noble reprint edition – last weekend off B&N's bargain shelves. It's interesting – full of the various beautiful women of DC Comics as they have appeared on covers through the years – Wonder Woman, Supergirl, Batgirl, and so forth. Not just heroines – anti-heroines such as Catwoman, and even villainesses such as Harley Quinn and Poison Ivy, get sections or at least notice thrown their way.  Many are oversized, full-page renditions.  There is plenty of commentary as well, sometimes humorous, putting the covers into their historical context both in comic-book and wider societal developments.

There is a glaring omission, however. Partly it arises from considerable bias toward the more recent period with only a relative few scattered from before the past couple of decades of DC Comics' now 75-plus-year history. And, partly, that's understandable. Artists such as Adam Hughes, who figures prominently and writes the foreword as well, have provided a great many cover images guaranteed to make any red-blooded male fan's eye linger a bit overlong. But I would say that there is at least one artist from several decades ago, mainly the late 1960s and early 1970s, who deserves more than the one or two examples that appear scattered through this book. For a period in the early 1970s Nick Cardy seems to have been DC's cover-artist of choice. And even before that, his renditions of Mera in the pages as well as on the covers of Aquaman as well as Donna Troy Wonder Girl in Teen Titans fed many pubescent fantasies of this Absent-Minded Professor-to-be. Donna Troy is given a few covers in the “Wonder Woman” section of this book. Poor Mera, however, is confined to one cover (p. 205) – unless I missed some more – and not even a single one by the great Nick Cardy, who made her look so perfectly luscious! 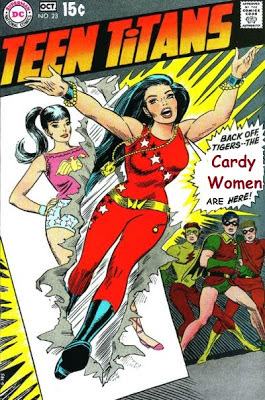 I consider this to be enough of an injustice that I have now spent considerable time collecting a fairly exhaustive gallery of cover images that I wish to present as sort of an unofficial addition to Simonson's DC Comics Covergirls volume. It is arranged somewhat along the same lines as the book, but Cardy's body of cover illustration does, in my mind, necessitate the addition of a couple of sections.  But within those sections, the freedom of the Internet allows for a more comprehensive presentation than the necessarily selective limitations imposed by the print medium.  So here are virtually all of the covers that Nick Cardy drew for DC Comics prominently featuring what have become known and admired as "Cardy Women."

First, a couple of links: The Wikipedia article (here: http://en.wikipedia.org/wiki/Nick_Cardy) gives a good quick overview of Cardy's life and career. A fan has created an homage website which can be found here: http://nickcardy.com/ .

Then for the actual "Cardy Women Addition," please go to my main blog here:  http://randomramblings-absentmindedprofessor.blogspot.com/2012/11/dc-comics-covergirls-2007-cardy-women.html .

Superman: The High-Flying History of America's Most Enduring Hero (2012) 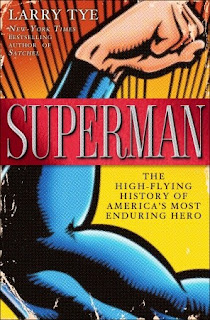 
The first day we were back in our offices after the summer, during what's called “On-Call Week” (I keep telling them, “I'm not that kind of doctor!”), one of my senior colleagues – a US historian – came to my office and said he had something to show me. In his office he presented me with this book, which he said he had received a few weeks ago, and during his reading he kept telling his wife, “Kent would really like this book!” He was right about that. He loaned it to me, and I finished it last night. It is perhaps the best single book I've ever read on the greatest hero of 20th-century American pop culture, and a great introduction to a genre of story-telling that I have loved since childhood and will continue to love until the day I die. The author neatly places each within the changing contexts from the era of their conception, the 1930s, all the way until the present, when although the comic-book medium itself is but a shadow of its former self, at least in terms of sales, the granddaddy of all superheroes himself remains a cultural icon recognized and loved not just in the US but all around the world.

For the rest of my thoughts on this wonderful book, go here.

As I've said before and will again – and often, no doubt – Aquaman was my first favorite super-hero. As corny as his concept may have seemed to some nay-sayers even then, I was swept up in the adventures of the King of the Seven Seas from the first time I remember seeing him on the Superman/Aquaman Hour of Adventure. So when Aquaboy made his first – and to my knowledge only significant – appearance, in the pages of Superboy, "The Adventures of Superman When He Was a Boy," I was tickled pink. I don't remember if I knew it was coming from some DC Comics house ad, or if I was suddenly made aware of it by seeing it on the stands, but I do remember reading and rereading this comic. I most associate it with the back sun-room of my paternal grandmother's house, which faced across a big field toward my childhood home. When I conceived the idea for this blog devoted to significant comics I remember from my childhood, this issue was among the first to spring into mind. Like the vast majority of my childhood comics, it was lost or sold off – or possibly just fell apart from wear – long ago, so I had to buy it back from my on-line back-issue vendor. In my memory, however, I did not dream that it was significant for more than just the appearance of Aquaboy. 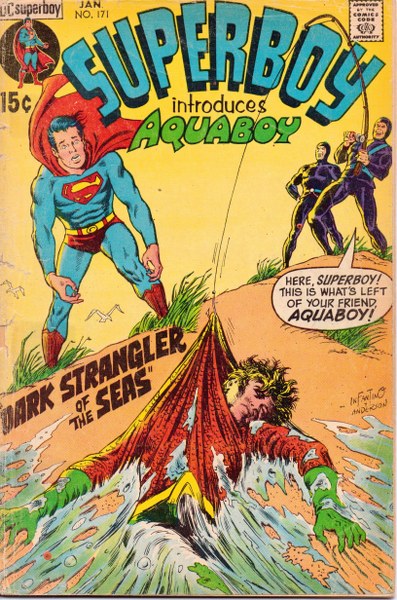 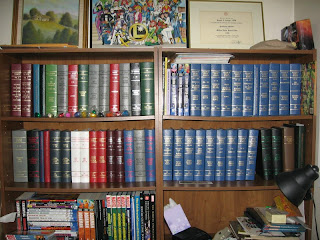 After a bit of a hiatus over the past year or so, I have recently taken back up with the process of having my comic book collection library-bound into fine hardcover volumes.  It is a long and ongoing process because not only am I binding some of my very oldest comics, but after a period in the middle part of the just past decade when I had changed into pretty much exclusively a "wait-for-trade" comics fan, with my discovery of comic binding I started buying mostly monthly issues again with the intention of having those bound, too.  Since, therefore, most of my bound volumes contain comics well outside the scope of this particular blog, mainly the late 1960s, maybe sometimes straying into the early 1970s, I mainly describe my library-bound comic book collection in my other blog.  Because, however, some of the volumes extend back into that period, I wanted to put a link to that entry here (click here).  I hope you enjoy reading about it.  Cheers!
Posted by Kent G. Hare at 10:24 PM No comments:

Email ThisBlogThis!Share to TwitterShare to FacebookShare to Pinterest
Labels: comic collecting, Library-bound comics, link to my other blog

After far too long, I'm finally sitting down to inaugurate this blog. Like all the comics I will be writing about in this newer blog, I have vivid memories of these issues. But, after more than forty years, my memories were imperfect. In fact, I had conflated the two issues considered here into one, hence the double-issue post to begin with.


In my memory, there was a time when Superman married Lois Lane – actually, one of the many times that happened during the Silver Age of Comics, where “Imaginary Tales” of their marriage became practically a bimonthly staple. “Imaginary Tales” were the Silver-Age DC equivalent of their later “Elseworlds” semi-imprint, whose tag-line – “[H]eroes are taken from their usual settings and put into strange times and places – some that have existed, or might have existed, and others that can't, couldn't or shouldn't exist” – would serve here just as well. The particular story that stood out the most for me was the cover image of Superman and a raven-haired little girl, clad also in blue and red, mourning before a tombstone for Lois Lane; Lois being blinded and Superman crafting an engagement ring out of a nut when he proposed to her on the spot; a raven-haired teenaged girl continuing the super-heroic legacy of her father. I would think of these vivid images from time to time over the years. I'm not going to try to self-psychoanalyze as to why.

A few months ago, when I was putting together a back-issue order with an on-line vendor and was coming up a few dollars shy of the $50 order threshold to qualify for free shipping, something brought those images freshly to mind and moved me to explore the wonderful Time Machine at the website, Mike's Amazing World of DC Comics, which allows you to view the comics that were on the stands during any given month. Knowing only the general time frame, most likely the late 1960s-early 1970s, I stepped my way through the months until I hit paydirt in the DC Comics cover-dated April 1969. There was that well-remembered cover. A copy of the issue could be had from my vendor in decent condition for a decent price, just enough to push me over the $50, and I placed my order.

Kent G. Hare
a.k.a. "absentminded- professor" - Professor of Early European History at a small state university in Louisiana, married, one son, a variable number of cats. More to the point, a lifelong fan of heroic tales of all stripes, especially the greatest heroic tale ever told.

Blogs of a Similar Nature!